Ozone Diplomacy in the Reagan Administration | 1987

Ronald Reagan forged a reputation for dismissing environmental causes. Yet in an act of historical irony, his administration sparked U.S. participation in its first and since only, international environmental climate accord: the Montreal Protocol. Faced with global concerns over ozone depletion by continued output of Chlorofluorocarbons (CFCs), the Reagan Administration became the first in U.S. history to affirm an international commitment to protect the environment. The Reagan Administration took unpreceded diplomatic steps to conform with United Nations guidelines for controlling chemical outputs. This Herblock cartoon appeared in June 1987, on the heels of an anecdotal report that Reagan’s Secretary of the Interior, Donald Hodel, downplayed the severity of the ozone crisis. By this account, Hodel suggested that Americans combat the increased UV radiation caused by ozone depletion with alternatives to regulation; namely sunglasses, sunscreen, and hats. The cartoon encapsulates the controversy and dialogue surrounding the nation’s first and only extant international environmental agreement. 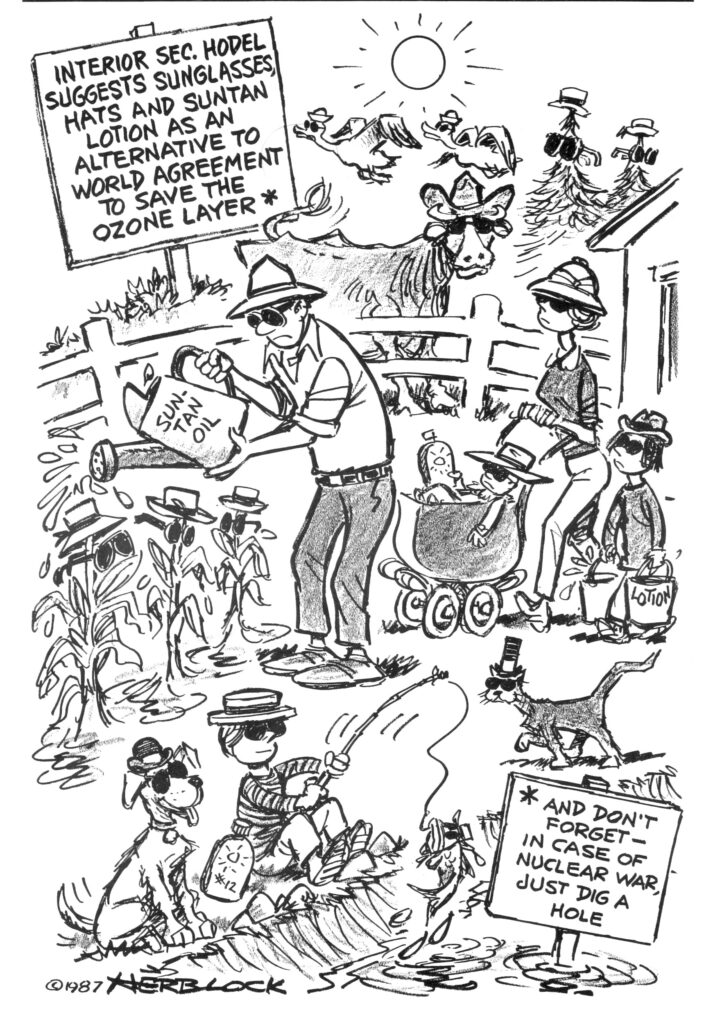 During the early twentieth century, new air conditioning and refrigeration technology began using CFCs, which soon became commodified as “Freon” and other trade names. As the usage of CFCs continued to climb during the postwar period, scientists began observing a breakdown of the ozone layer. Located in the upper stratosphere, the ozone layer filters the most pathogenic types of radiation. However, CFCs can interact with Ozone (O3) splitting it into component molecules that allow cancer-causing amounts of UV energy to reach the earth’s surface. During the 1980s, the United Nations considered a series of regulations to limit the usage of CFCs, and in 1987 the Reagan Administration participated actively in these deliberations. Nonetheless, evidence suggests that within the White House some cabinet officials opposed subjecting the nation to regulations that seemed to obviate the administration’s domestic agenda emphasizing economic deregulation. The Washington Post reported that Interior Secretary Donald Hodel, rather than grant American participation in the treaty, proposed a public relations campaign to provide sunglasses, sunscreens, and other personal protective equipment to limit the negative effects of ozone depletion. Herbert Lawrence Block, known to readers as “Herblock,” was one of the most prolific political cartoonists of the twentieth century and illustrated the Hodel controversy with this cartoon. By the end of his career in 2001, Herblock enjoyed international syndication, four Pulitzer awards, and the Presidential Medal of Freedom. His career was spent satirizing political (usually Republican) policies and politicians and encapsulating aspects of public sentiment over controversial issues. The cartoon depicted first in the Washington Post was then nationally syndicated by the cartoon-contracting company, Creators Syndicate and brought national attention to the ongoing White House deliberations.

Hodel’s “Ray-Ban” plan, as it came to be known, provided an easy target for critics of the administration. Thus, Herblock’s parody of the statement likely helped influence Reagan’s decision to support the protocol. Op-ed and “Letters to the Editor” flooded into the nation’s newspapers harshly criticizing Hodel’s attributed proposal, showing a dynamic public dialogue with international diplomacy. Contrarily, Assistant Secretary of State John Negroponte believed in the importance of the ozone issue and presented it to Secretary of State George Schultz, who fostered President Reagan’s support for the international treaty. Shultz publicly labelled the protocol, “an important instrument for the protection of a critical global environmental resource.” Consequently, Hodel’s proposal, if it ever did exist, faded out of internal discussions.

The image itself touches upon themes relevant to political discussions at the time. The cartoon depicts the impracticality of the plan attributed to Hodel, demonstrates an emphasis of the nature-as-commodity mentality, and it harkens to the overarching nuclear motif of the Cold War. In regards to the first point, Hodel’s alleged comments depicted in the cartoon suggest providing sunscreen, hats, and sunglasses to all Americans, demonstrating the practical infeasibility of such a practice. It is also noteworthy that the image depicts the conception of “nature-as-commodity” in nearly all forms. The rows of crops, the boy fishing, the people recreating, and the domesticated animals point towards a construction of protecting the ozone layer not as an intrinsic good (done for its own sake), but as an instrumental good designed to promote human well being. Finally, the cartoon connects the message directly to American foreign policy and the policy discussions of the Cold War with the insertion of its second phrase, “in case of nuclear war, just dig a hole.” Although Herblock intended his cartoon more as political grist, it contextualizes key themes and political discussions in the public arena concerning ozone diplomacy.

Adopted by the United States and other nations in September, 1987, the Montreal Protocol promptly received support from President Reagan. The U.S. Senate ratified the treaty in March, 1988. In the words of Richard E. Benedick, American negotiator at the discussions, “the agreement on ozone is really a landmark because it is the first time the international community is taking hold of an environmental problem before it happens.” However, Benedick later attributed part of the protocol’s success to simultaneous economic innovation: the market began developing low-cost and more efficient alternatives to the noxious carbons just as the treaty came into effect. Thus the protocol’s policy impact cannot be divorced from concurrent market-based decisions to phase out CFCs. Nevertheless, the Montreal Protocol remains the only continually-enforced international pact on environmental policy ratified by the United States Senate. To be fair, Donald Hodel consistently denied ever making the so-called “Ray-Ban” remarks and only weak anecdotal evidence supports those claiming otherwise. However, the cartoon’s topic continues to resonate today as it did in 1987.

Hydrofluorocarbons (HFCs), which largely replaced CFCs after the Montreal Protocol, are now under scrutiny by the international community for their role in accelerating climate change. The proposed 2016 UN-sponsored Kigali Agreement would phase out HFC usage, but the United States has yet to ratify this amendment to the Montreal Protocol. As recently as January 2020, bipartisan discussions were underway in Congress to pass a bill limiting HFC usage. The Montreal Protocol was not only a milestone of United Nations and environmental history but remains an outlier in American diplomatic history. This Herblock Cartoon serves as a reminder of an international policy whose success, yet controversial in nature, remains as vibrant and relevant today as it did in 1987.